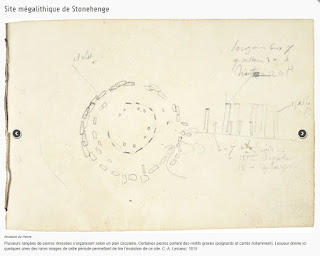 http://www.museum-lehavre.fr/en/objet/england
Several rows of erect stones are arranged in a circular plane. Some stones have engraved motifs (daggers and squares in particular). Lesueur gives here some of the rare images of this period to read the evolution of this site

Lesueur became acquainted with William Maclure (1763-1840), an eminent geologist and one of the founders of the Academy of Natural Sciences of Philadelphia, while the latter was visiting Paris. Maclure was in search of a field naturalist and travelling companion on his geological tour of the West Indies and the United States. Lesueur agreed to accompany him for 2 years. The two left from Paris in August of 1815. After a visit to Stonehenge, they sailed to the West Indies, where Maclure engaged in geologcial studies, and Lesueur collected natural history specimens and produced over 100 sketches of West Indies' zoological and mineralogical subjects. In the spring of the following year, Maclure and Lesueur arrived in Philadelphia, only to embark on a five-month investigation of the northeastern United States and Great lakes region. Lesueur collected specimens, filling his sketchbooks. He had already found the study of ichthyology important, and these travels reinforced his intention to investigate and write about the fish of the U.S.
Upon returning to Philadelphia, Lesueur and Maclure wrote out the results of their travels, publishing many scientific papers in the Journal of the Academy of Natural Sciences of Philadelphia, https://www.ansp.org/research/library/archives/0900-0999/lesueur938/