The Date of Skipsea Castle Motte 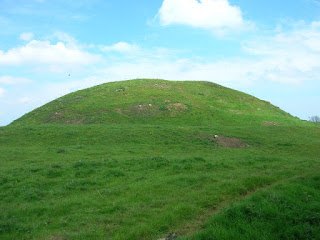 Skipsea Castle is a Norman motte and bailey castle near the village of Skipsea, East Riding of Yorkshire, England. Built around 1086 by Drogo de la Beuvrière, it was designed to secure the newly conquered region, defend against any potential Danish invasion and control the trade route across the region leading to the North Sea. The motte and the bailey were separated by Skipsea Mere, an artificial lake that was linked to the sea during the medieval period via a navigable channel. The village of Skipsea grew up beside the castle church, and the fortified town of Skipsea Brough was built alongside the castle around 1160 to capitalise on the potential trade....

The motte, constructed from sand and gravel, was deliberately built on a natural glacial mound, making it appear unusually large. It is 100 metres (330 ft) in diameter and 11 metres (36 ft) high, with a 0.25 acres (0.10 ha) of space on the top, protected around the base by a 1.5 metres (4 ft 11 in) high bank and a ditch up to 10 metres (33 ft) wide, although when first built these would have been taller and deeper than today.[25] There was a timber keep on the motte, and possibly a stone gatehouse at the south-east corner, leading onto the earthwork causeway that crossed the mere south to link the motte with the bailey. The eastern causeway linked the motte with the church in Skipsea village....


Extending Histories: from Medieval Mottes to Prehistoric Round Mounds (‘The Round Mounds Project’ for short) is a three-year research project, funded by the Leverhulme Trust, and carried out by a team of researchers from the University of Reading and the Scottish Universities Environmental Research Centre (SUERC).

The Project, led by Dr Jim Leary, seeks to unlock the history of monumental mounds in the English landscape. Neolithic round mounds, such as Silbury Hill – the largest prehistoric mound in Europe, are among the rarest and lest well understood monuments in Britain. Recent work by Jim Leary at the medieval Marlborough Castle motte, Wiltshire, has shown it to be a Neolithic round mound which was reused in the medieval period, and raises the possibility that other castle mottes may have prehistoric origins.


And Skipsea Castle is one of the mounds he has examined, and he is excited about the date of it revealed by an extracted core from it.


Live on Radio 4 on 3rd October Jim Leary revealed it isn't a Norman Motte as it was dated to the Middle Iron Age. (Most of the other mounds he has examined are Norman). Is it a burial mound, analagous to some European ones? Of course whatever is under there is undisturbed and plans are underway to find out more.