On the Absence of Sarsens in the Stonehenge Landscape

It has been mooted that some of the sarsens at Stonehenge were found in the immediate landscape and that solution hollows in the chalk indicate where they were. It seems likely that the Heelstone was and that it is erected in its hollow, but there is no evidence for where any of the other sarsens in the monument came from. There are a few other larger stones such as the Cuckoo stone in the wider area though. It has been posited that various hollows in the landscape are solution hollows from whence stones were extracted. A scan from The Stonehenge Landscape by Bowden et al  shows this: 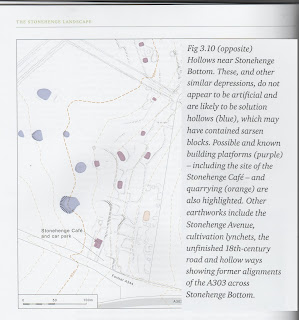 Against this is the absence from the landscape of smaller sarsens, in the landscape around Avebury, for instance, everywhere and every old structure has sarsens. Around Stonehenge there are only a very few sarsen pebbles in the fields.

The Hidden Landscape project which scanned under the ground found none, below is their scan of the area in the diagram above. It wasn't just at Durrington Walls they didn't find buried sarsens. 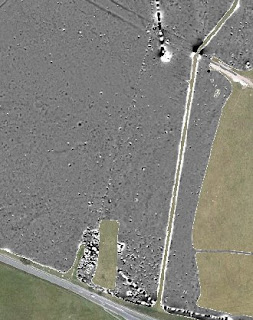 I think it is unlikely there were any large sarsens in any number near Stonehenge.
Posted by Tim Daw at Saturday, October 29, 2016