Robert John Langdon claimed last year that some green patches leading out of Avebury showed an avenue of stone holes;

I pointed out at the time this is just looked like the grain sprouting from where the previous crop has been laid by a path being formed.  After harvest the cultivating tractor goes back and forth dragging the seeds one way and then on return the other way.

I think the path was formed when the credulous visited a crop circle and the farmer had to create a path for them. Here's two example of crop circles on Waden Hill with a path following the same line as his avenue from Avebury. 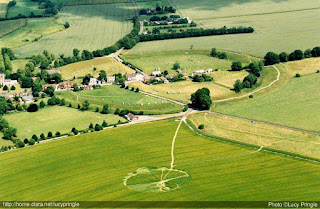 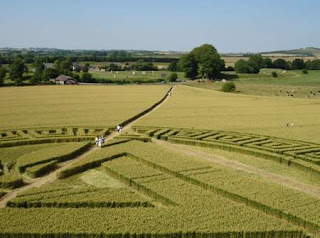 My sleuthing dog, Rufus, pictured, and I came across the same phenomenon on our morning walk near All Cannings this autumn.
The farmer had had to run down and mow the footpath across his field and after harvest and cultivations a very similar pattern appeared. 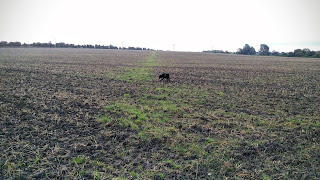