Bluestone Chips, Paper by Ixer and Bevins And A New Discovery

A very interesting paper about the Bluestone chips or debitage at Stonehenge has just been released:

CHIPS OFF THE OLD BLOCK:


Within this century there has been a renewed interest in
the lithology of the Stonehenge bluestones, both for the
standing orthostats and also for the vast numbers of broken
bluestone material, now referred to as debitage.
Increasingly it has been recognised that there are a number
of interesting problems associated with this debitage found
within the ‘Stonehenge Landscape’, most notably their
original geographical provenance, their internal Stonehenge
provenance (matching debitage to parent orthostat), the
reason for their presence and finally explanations for the
apparent mismatch between the lithologies of the (aboveground)
bluestone orthostats and the debitage both in terms
of type and numbers....

This coincides with Rob Ixer kindly confirming that the bluestones chips pictured below (click to enlarge)look like Preseli Spotted Dolerite - a chemically altered igneous rock containing spots or clusters of plagioclase feldspar. 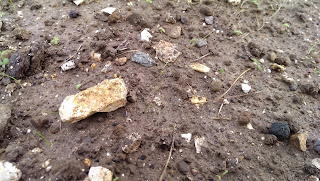 Over two hundred chips have been seen so far on the surface. It is close to Stonehenge, in the landscape but not within the Stonehenge Triangle. I have of course informed the archaeologists at Stonehenge, and can't tell anyone else the location. Sorry.

Lithics from within the Stonehenge landscape collected by Mr T. Daw.