The Mystery of Hole G

Before Hawkins Decoded Stonehenge an amateur investigator Peter Newham came to some similar conclusions about alignments. 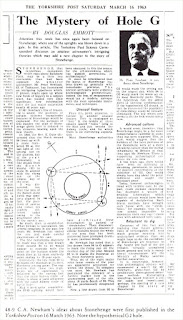 From Megaliths, Myths and Men: Introduction to Astro-archaeology by Peter Lancaster Brown (24 May 1976) - highly recommended and explains poor Peter's misfortunes as he tried to publicise his findings. He did eventually publish a book The enigma of Stonehenge and its astronomical & geometrical significance which can be found on eBay for a couple of quid usually.
Posted by Tim Daw at Sunday, September 30, 2012