A short holiday in Paris brought the unexpected delight that the streets are paved with Sarsen stones - not all the streets, just some of the older ones and around the Louvre. In France they aren't called Sarsens, but they are  silicified  sandstone boulders, they are found still in the sand rather than as on the Marlborough Downs left behind after the sand has been eroded. I haven't had a chance to find out more about them but it appears that maybe some boulders are to be found lying on the surface judging by my random discoveries.

Much more to be investigated.

A brief description from a very informative website is below. 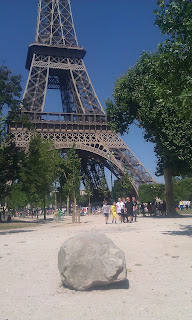 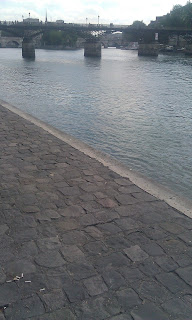 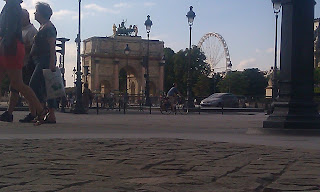 
Thiry , M. and Marechal, B. 2001. Development of Tightly Cemented Sandstone Lenses in Uncemented Sand: Example of the Fontainebleau Sand (Oligocene) in the Paris Basin.By Médard Thiry and Benoît Marécha. Journal of Sedimentary Research, May 2001, vol. 71, no. 3, pp. 473-483.
In the Fontainebleau Sand (Oligocene), superposed lenses of sandstone result from a silicification process controlled by the watertable during the recent geomorphologic evolution of the landscape. The most outstanding feature of these silicified bodies is the contrast they show between the very hard, tightly cemented sandstone and the loose and permeable embedding sand. This pattern raises the question of the growth mechanism of the lenses. The lenses are composed of tightly quartz-cemented sandstone with well-developed quartz overgrowths. Cathodoluminescence of the sandstones shows detrital grains with subeuhedral quartz overgrowths and isopachous quartz rims surrounding the detrital grains or the overgrowths. The isopachous rims suggest amorphous or poorly ordered silica deposits that later recrystallized into quartz. The syntaxial overgrowths and the silica deposits alternate in a sequential way on a centimeter scale and reflect variations in the physicochemical characteristics of the feeding groundwater. The mechanism of the silica deposition is probably complex and can only be hypothesized. Whatever the mechanism, it appears from the arrangement of the sandstone layers that silica precipitation occurred near the watertable and at the interface between regional groundwater and local recharge water. Silica precipitation along an interface may explain the sharp boundary between cemented sandstone and loose sand.
The cementation was modeled with the coupled reaction-transport code METIS. The model was constrained with permeability values, hydraulic gradient, and dissolved silica contents measured in the Fontainebleau Sand. The simulation reproduced the characteristics and morphologies shown by the sandstone lenses in the field. It shows the importance of a high groundwater flow rate to provide the silica necessary for cementation of the sandstones in a time span compatible with the geological constraints. The conventionally accepted kinetics of quartz precipitation did not result in simulating cementation of the sandstone lenses in a geologically reasonable time frame. To overcome this constraint, it was necessary to increase the kinetic reaction rate about 1,000 times, which agrees with the amorphous silica deposits observed in the Fontainebleau Sandstones.