Stone 56 - the tallest one with the tenon on the top of it - is always assumed to be symmetrical to the Solstice Axis of Stonehenge. Look through the gap between it and the now recumbent Stone 55 to line up with the central doorway between 30 and 1, Heel stone, Avenue et al. 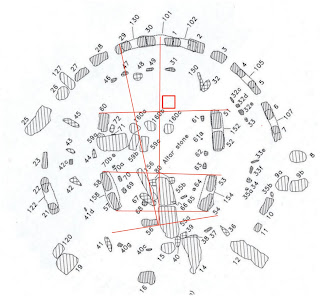 The stone is twisted compared to the horseshoe arrangements of the Trilithons. The stone was, of course, re-erected in 1901. Gowland's report seems to make it clear that there was a clear back wall of chalk it was put back to. But he may have not got it right, or it may have twisted since, though I think that is very unlikely. Or was it originally erected splayed to make the gap more impressive, or for some other reason?

Gowland found no well defined cutting in the chalk to define the original position of Stone 55 so we haven't the information to know how the fallen stone stood.

So incorrect reconstruction or original feature? 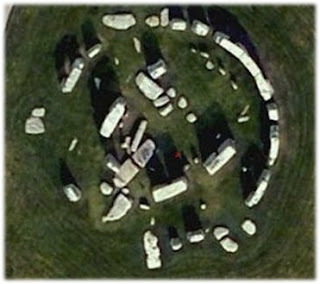