The Silk Hill Henge at Brigmerston.

Reading JFS Stone's book Wessex I came across a reference to a possible Henge on Silk Hill at Brigmerston.
Looking it up I found this:


Site of an alleged "enclosure of Woodhenge type" at Silk Hill, Brigmerston. JFS Stone referred to such a site on the basis of a description by Colt Hoare of "a very singular tumulus...surrounded by a beautifully formed vallum, and the area within it is quite flat, without the least appearance of any sepulchral mound...the interment of burnt bones was deposited at some distance from the middle". Harding and Lee note a cropmark ring ditch as the only possible candidate, the site featuring a clear internal parch mark and faint traces of external parching. It is likely that the feature Colt Hoare observed was one of several complex round barrows in the vicinity. 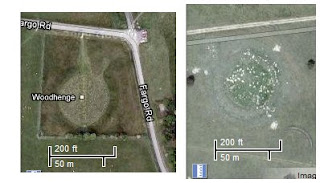 The Pastscape record points to the group of barrows to the north west of this feature shown on the right in the screen scrape from Google Maps at http://g.co/maps/ym6yd . It looks very similar in size and form to Woodhenge as shown on the left. Is this the "henge"?


The Field Archaeology of Salisbury Plain Training Area describes it as a bowl barrow with an external bank within the ditch.
Posted by Tim Daw at Thursday, April 26, 2012