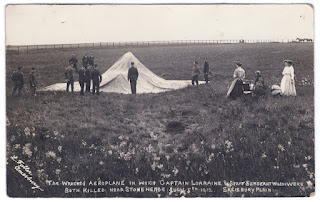 Click for much bigger version
Captain Eustace Lorain and his passenger Staff Sergeant R H V Wilson were flying a Nieuport Monoplane out of Larkhill on a routine morning practice sortie. They were executing a tight turn when the aircraft fell towards the ground and crashed. Wilson was killed outright and although Loraine was speedily transported to Bulford Hospital in a horse-drawn ambulance, he succumbed to his wounds only a few minutes after arriving at the Hospital.[5][6] Loraine and Wilson were the first Flying Corps personnel to die in an aircraft crash while on duty. Later in the day an order was issued which stated "Flying will continue this evening as usual", thus beginning a tradition.
The site of the crash at Greenlands Bottom, near the intersection of the A344 and the A360 roads and less than a mile west of Stonehenge, is now known as 'Airmen's Cross'. There is a stone cross memorial in middle of the grass island at the junction and its inscription reads:
'To the memory of Captain Loraine and Staff-Sergeant Wilson who whilst flying on duty, met with a fatal accident near this spot on 5 July 1912. Erected by their comrades'. 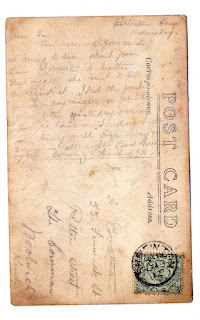