Hydroclimate of the building of Stonehenge

Hydroclimate of the northeastern United States is highly sensitive to solar forcing:

"Dramatic hydrological fluctuations strongly impact human society, but the driving mechanisms for these changes are unclear. One suggested driver is solar variability, but supporting paleoclimate evidence is lacking. Therefore, long, continuous, high-resolution records from strategic locations are crucial for resolving the scientific debate regarding sensitivity of climate to solar forcing. We present a 6800–year, decadally-resolved biomarker and multidecadally-resolved hydrogen isotope record of hydroclimate" 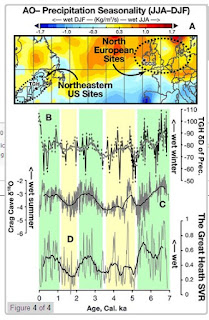 The middle line is from Crag Cave in Ireland, marked CC on the map.

I can't afford the $25 to buy access to the paper but it looks from this snippet as though from 5000 to 4500 years ago there was a dramatic decrease in summer rainfall (in Ireland at least). The sort of decrease that would change a thriving chalkland community to a struggling one.

Pure conjecture based on this one graph, but an intriguing idea.
Posted by Tim Daw at Tuesday, March 06, 2012