Yesterday the Mesolithic tree-throw and post holes were showing up well with grass mown and it reminded me to record my belief that there may have had been a practical purpose.
If you are ever to try a spot of big game hunting, I haven't myself, I am assured that the Cape Buffalo is the most dangerous beast to hunt. I imagine Aurochsen were similar. They don't take kindly to being wounded and a couple of tonnes of beef behind some horns travelling at speed intent on revenge is best avoided. Using only spears and arrows kills would not have been quick and easy.
Deer hunters in our local woods still use high seats, not so much to avoid the danger, as to be out of sight and smell of the prey and have a better view and platform to operate from.
In India and south Asian countries, such platforms, in trees and where trees were absent on poles, are called "Machans". Thankfully they now more often used to photograph big game from than for shooting.
David Saunders* in his excellent studies on prehistoric cattle movements touches on the roles the posts may have played but doesn't, I think, suggest them as machans. So combining a sketch from E P Stepping's Diary of a Sportsman Naturalist in India and a photo of the post holes let me supply a suggestion of how the posts alongside a natural funnel for the beast may have been used. 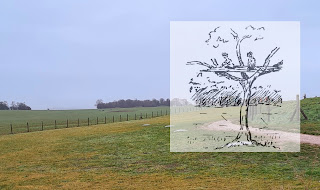