How many original entrances did Durrington Walls have?

It seems surprising that the number of entrances that Durrington Walls originally had is uncertain. 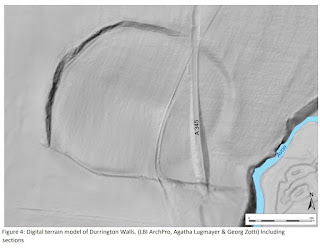 Model from Gaffney V, Neubauer W, Garwood P et al (2018) Durrington Walls and the Stonehenge Hidden Landscape Project 2010-2016. Archaeological Prospection. 25(3): 255-269. http://hdl.handle.net/10454/16081
"Durrington Walls is a large oval henge, classified as a type 2 henge (Piggott 1939), with an internal irregular ditch and external bank, and with two entrances known, to the east and to the west (Wainwright and Longworth 1971, 1), although Parker Pearson et al. (2007) suggest four entrances."
Higham, R., & Carey, C. The Durrington Walls Sarsen Burial relocated and reconsidered. The Wiltshire Archaeological and Natural History Society Magazine, 112, 74-84.
"It was not possible to determine the presence or absence of the assumed north-west entrance in the bank/ditch as there is significant metallic noise at the surface here. Similarly, it is not possible to establish the nature of the apparent breaks on the north and east sides due to the presence of the old and new main roads cutting through the earthworks at these points."
"There appears, for example, to be no certain evidence for a north-west entrance. The air photograph used by Crawford (1929, 54-6, pl.III) might indicate such an entrance, but this also seems to show a gap in the ditch on the east side of the enclosure which certainly does not exist. The land surface in the area of the supposed entrance is steep and very uneven, apparently heavily-disturbed, suggesting relatively recent modification of the scarp slope possibly to create an entrance ramp into the field within the enclosure area, which might account for the ‘gap’ observed by Crawford. The geophysical survey data (GPR and FDEM) are ambiguous, but there is certainly a suggestion that the ditch is continuous (see fig. 15). It is possible, therefore, that the Durrington Walls henge enclosure only had a single south-east entrance." Gaffney et al
So the South -East entrance is certain, it seems to be ceremonial and aligned to the Solstice.
The North West one opposite seems to be becoming less certain, the area was used as a rubbish dump so it is hard to survey but there doesn't seem to be any evidence it was there.
"the vexed issue of the north-western entrance to Durrington Walls henge becomes significant. Initially postulated by Crawford (1929, 54–56, plate III), the entrance is complicated by the presence of a large scarp that lies between the bank and ditch, and which must pre-date the enclosure (Gaffney et al. 2018, 10). The area associated with the postulated entrance is very steep, uneven and heavily disturbed and the geophysical survey data from the henge is ambiguous regarding whether an entrance actually exists at this point."   Gaffney, V. et al. 2020 A Massive, Late Neolithic Pit Structure associated with Durrington Walls Henge, Internet Archaeology 55. https://doi.org/10.11141/ia.55.4
The North and South entrances are hard to interpret as the old road went through them. Talking to archaeologists the feeling is that the north one probably is the least certain and is probably more a modern agricultural access to the interior. The South entrance has more features such as a curve to the ditch which hint it may be original.
To answer the question, I think 1 is certain and 2 probable, but not the traditional two. I think as at Stonehenge there was a ceremonial entrance and maybe a more functional one to the south.
Posted by Tim Daw at Wednesday, December 21, 2022