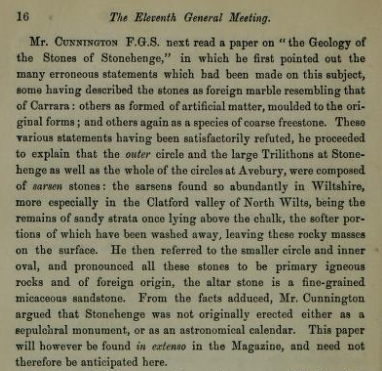 I have looked at the reference in Vol XVI which says “ But upon this subject, there is no one who deserves a hearing, and a more attentive hearing , too, than Mr Cunnington, F.G.S., who has devoted so much time and thought to the study of the geological character of the Wiltshire megalithic structures. He says, in a paper “on the geology of Stonehenge,” read at the Salisbury meeting of the Wilts Archaeological Society 1865: “We are indebted to Mr Prestwich, the treasurer of the Geological society, for the exact determination of the stratum from which the ‘Sarsens’ are derived (vide Journal of the Geological society).” (thanks to a volunteer library researcher for this)
This seems to have been the earliest geological  paper on the origin of the stones of Stonehenge, it would be interesting to see a copy of it.
Posted by Tim Daw at Saturday, May 01, 2021