Eric Ravilious Wiltshire Landscape - Where is it? 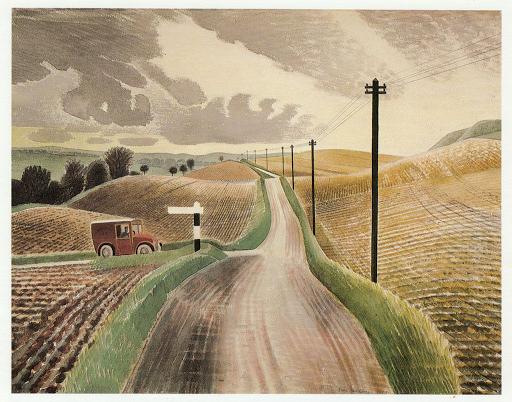 https://www.wikiart.org/en/eric-ravilious/wiltshire-landscape
The location of the 1937 painting by Eric Ravilious titled Wiltshire Landscape is argued over. He painted it when staying near Andover and was being driven "out across Salisbury Plain"
https://jamesrussellontheweb.blogspot.com/2014/06/eric-ravilious-wiltshire-landscape.html
It is usually thought to be on the road from Alton Barnes to Horton. As I live on that road I would be thrilled if it was but even allowing for artistic licence it isn't.
All the junctions on that road are crossroads with tracks to the downs opposite the roads to the villages. The one exception is the western turning to Stanton St Bernard which is now a crossroads but the track is modern - the 1922 map doesn't show it. But the turning had allotment gardens alongside it.
The trees on the left are also far too close for that location as well, and the road never had telephone wires along it. The boundary between the Marlborough and Devizes exchange is there and there was and still isn't any connection along that road, annoyingly for me as I'm the last house on the Devizes exchange and the Marlborough line has fibre Broadband which I lust after.
The shadows in the picture are indistinct and don't give a clear indication of direction, but the telegraph pole maybe throwing a shadow.
Having looked at all the possible roads I am convinced the nearest in appearance to the junction is the turning to Wilsford off the A342 which is on the road to Andover from the northern parts of Salisbury Plain.
The 1922 map shows a T junction with a Guide Post  in the right place and an open field opposite the turning. The hills to the right and the spring line trees on the left are very similar and the hills in the distance  are  a close match.
I can't find a better match. 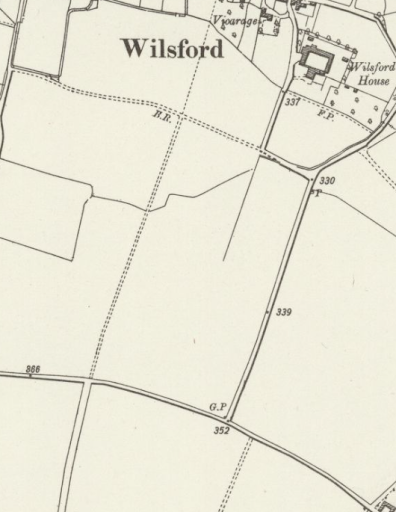