It seems the differing views on Durrington Walls between Vince Gaffney's Stonehenge Hidden Landscape Project (SHLP) and Mike Parker Pearson's Stonehenge Riverside Project (SRP) are still unresolved. The new SHLP paper has this to say, still suggesting stones may have been erected (as some sort of "Superhenge"?) at Durrington Walls. It will be interesting to watch this debated over. 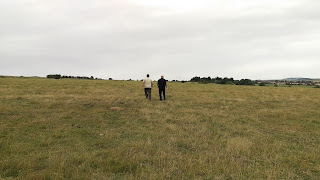 MPP and Gaffney at Durrington Walls - click to enlarge.


The wider significance of the features discovered in the course of the SHLP surveys very much depends on their dating and their chronological and spatial relationships with the late Neolithic settlement. In particular, if they pre‐date the settlement, the presence of a significant earlier monument at Durrington Walls throws open current interpretations of the process of sacralization and monumentalization not only locally but across the whole Stonehenge landscape. An early suggestion that some of the features contained stones may have been more provocative as this would directly challenge the premise at the heart of the SRP, and the interpretative framework that stems from it. Whilst the existence of stones at Durrington Walls is currently conjectural given the results of a recent joint excavation by the SHLP and the SRP in 2016 (Current Archaeology 320), the presence of known standing stones in the immediate area, including the Cuckoo Stone (Thomas et al., 2009, 42) and sarsens at Woodhenge (Pollard & Robinson, 2007), suggest that stone structures on or near the site should not be discounted. If substantial monumental structures, whether stone or timber, existed at the time the settlement was occupied, it may be that the settlement was less extensive than has been suggested and/or had a particular social and religious purpose in relation to the monument it was adjacent to. If the new features post‐date the settlement, this has less impact on the SRP interpretative framework, though this would still demand a major reconsideration of the sequences, temporalities and purposes of construction tasks and related activities at Durrington Walls, with wider implications for our understanding of social effort and organization in the mid‐third millennium BC. In particular, the very narrow timeframe suggested by Bayesian modelling of the Durrington Walls radiocarbon dates (Parker Pearson, 2012, 110) would in this scenario point to settlement (possibly on an extensive scale with dense occupation), construction of several small enclosures and timber buildings, settlement abandonment, construction of the new timber or stone monument (a major undertaking in its own right, whether completed or not), abandonment of this monument, and finally a massive henge enclosure and timber circle construction project, all within a period of less than 75 years, even within a generation. Whilst certainly not impossible, this would suggest a period of very rapid and far‐reaching social and perhaps religious change, and does not account for the creation of the scarp or its apparent relationship with the newly discovered stone/timber monument.