The A40 Bluestone Transport Route to Stonehenge 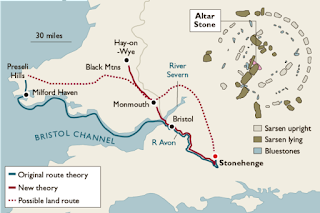 The Times  (29/7/18) picks up on the Bevins and Ixer paper below to tie in the Altar Stone to the A40 route of bluestone transport.

At the heart of Stonehenge lies a six-tonne riddle. The Altar Stone is formed from a purplish-green sandstone that is unlike anything else on the site.

Archaeologists believe the stone was hauled to Salisbury Plain from the Welsh borders by crossing up to three rivers. It raises the possibility of a Stone Age highway for megaliths stretching from Pembrokeshire to Wiltshire.

The larger sarsens come from nearby Marlborough Downs and the smaller bluestones from the Preseli mountains in Pembrokeshire, but the sandstone of the Altar Stone is foreign to both areas.

Rob Ixer, of the University of Leicester, and Richard Bevins, of the National Museum of Wales, say it was “very probably” quarried from the Senni Beds, a formation of sandstone from Llanelli to Herefordshire.

Getting it to Stonehenge would have involved hauling it down to Monmouth and the lower reaches of the River Wye with oxen and skids or rollers; then negotiating the River Severn, either near Gloucester and going south to Wiltshire, or taking a raft down the river and across to the mouth of the Avon.

As previously reported: “The only logical direction for the bluestones to go was to the north then either by sea around St David’s Head or eastwards overland through the valleys along the route that is now the A40” said Professor Parker Pearson. “Personally I think that the overland route is more likely. Each of the 80 monoliths weighed less than 2 tons, so teams of people or oxen could have managed this. We know from examples in India and elsewhere in Asia that single stones this size can even be carried on wooden lattices by groups of 60 – they didn’t even have to drag them if they didn’t want to.”


Retracing the footsteps of H.H. Thomas: a review of his Stonehenge bluestone provenancing study

The long-distance transport of the Stonehenge bluestones from the Mynydd Preseli area of north Pembrokeshire was first proposed by geologist H.H. Thomas in 1923. For over 80 years, his work on the provenancing of the Stonehenge bluestones from locations in Mynydd Preseli in south Wales has been accepted at face value. New analytical techniques, alongside transmitted and reflected light microscopy, have recently prompted renewed scrutiny of Thomas's work. While respectable for its time, the results of these new analyses, combined with a thorough checking of the archived samples consulted by Thomas, reveal that key locations long believed to be sources for the Stonehenge bluestones can be discounted in favour of newly identified locations at Craig-Rhos-y-felin and Carn Goedog.