Transport of the Stonehenge Bluestones: Testing the Glacial Hypothesis


Transport of the Stonehenge Bluestones: Testing the Glacial Hypothesis 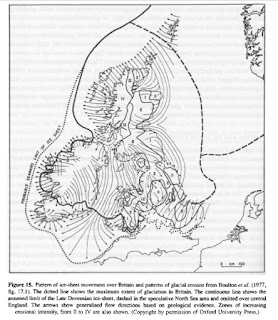 The hypothesis that the Stonehenge bluestones were transported by ice to the Wiltshire Downs is not consistent with current glaciological or glacial geological theory or observational data. The bluestone lithological assemblage is, however, absolutely consistent with derivation from a glacial drift source in Pembrokeshire; this is supported by the limited evidence for striae on some of the undressed bluestone surfaces. If the 36Cl date is accepted, this might suggest that such a source was of Late Devensian age. Thomas'view (1923) that the boulders were taken from the boulder-strewn slopes on the immediate south and south-east of the Prescellys between Cam Meini and Cil-maen-llwyd where all the types have been collected together by glacial action' (op. cit., 251) remains unchallenged, as do his principal objections to the glacial transport hypothesis: apart from the ice-marginal sites in north Somerset, nowhere between South Wales and Stonehenge, is there '... evidence of glaciation of an intense character. There are no trains of far-travelled boulders, no ice-scratching and polishing of outstanding rocks, and no thick accumulations of boulder clay ... such a hypothetical ice-sheet, in order to account for the Foreign Stones of Stonehenge would have to gather from Pembrokeshire blocks all of about the same size and mainly of two rock-types. It would have to carry them all that distance without dropping any by the way. Further, it would have to pass over all kinds of rocky obstacles without gathering to itself any of the various materials over which it was forced to ride' (op. cit., 254).
The common element which unifies all advocates of the glacial hypothesis is incredulity that these stones could have been transported from Pembrokeshire to Wiltshire by prehistoric man. This centres around the copious bluestone fragments found on-site and was first expressed by Judd (1902): '... it is quite inconceivable that they [the bluestones] should have been hewed and chipped ... and reduced in some cases to half their dimensions, after having been carried with enormous difficulty over land and water, and over hills and valleys' (Judd's italics, p. 117). Kellaway expresses a similar view in 1971. '... the motives for conveying them ... to Stonehenge while ignoring local resources are incomprehensible' (op. cit., 34). In the light of this disbelief a mass of extremely circumstantial evidence has been marshalled into an hypothesis which in its totality has some apparent credibility but whose component parts are either capable of alternative explanation or equivocal or non-existent. As Sherlock Holmes said to Watson: 'How often have I told you that when you have eliminated the impossible, whatever remains, however improbable, must be the truth. '
Posted by Tim Daw at Tuesday, May 08, 2018