The Early Field Systems of the Stonehenge Landscape 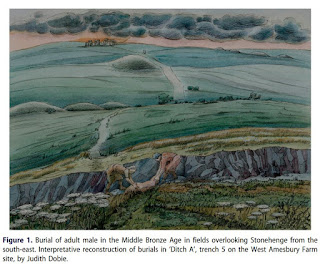 ABSTRACT
Recent survey, excavation and analysis in the Stonehenge World Heritage Site (WHS) during 2015 and 2016 has revealed new details of landscape structuration and the deposition of the dead during the Middle Bronze Age. The research reported here demonstrates the existence of early fields or enclosures in the eastern part of the WHS, that was previously thought to be an area of little agricultural or domestic activity in the Bronze Age. These features were succeeded by a major ditch system in which two individuals were buried, an unusual way of dealing with the dead in the Middle Bronze Age. At the same time, the body of a perinatal infant was deposited in a palisade ditch in the western part of the WHS. The paper explores how these actions help elucidate a period of significant change in the landscape around Stonehenge, during which natural features, ancestral monuments and the recent dead were enmeshed in complex ways of bounding and dividing the landscape.

ABSTRACT
Historic England archaeologists investigated a square enclosure on King Barrow Ridge, c.1km east of Stonehenge, as part of the Stonehenge Southern World Heritage Site Survey project. The enclosure had been mapped from aerial photography, geophysical survey and previously evaluated in 1993. Extensive further excavation was undertaken of the south-east corner of the enclosure. Despite extensive sampling for finds and environmental remains, only very limited evidence could be retrieved to date and characterise the enclosure. This report sets out the evidence from these recent investigations, and explores morphologically similar features across the region. In conclusion, whilst the most viable interpretation may be a Neolithic mortuary enclosure, it is also possible that the feature is a square barrow or sheepfold. If any further work is undertaken on the site it should explore the interior and northern/western ditches, but it would be better that the site be left in situ for the foreseeable future.
Posted by Tim Daw at Wednesday, February 28, 2018