A C Smith on the Marlborough Mound 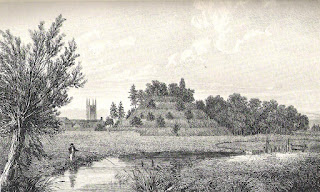 Engraving of Marlborough Mound from 'The Ancient History of Wiltshire', 1812-1821

The Rev A C Smith writing in his magisterial 1884 book British and Roman Antiquities of Wiltshire is subtitled A Hundred Square Miles Round Abury;

I cannot take leave of the barrows without pausing for a moment to mention Silbury, the "miniature mountain," as Canon Greenwell dubs it ; and undoubtedly the largest artificial tumulus in England, and even in Europe, if we except one or two in the extreme east of European Russia, which are reported by some - though I know not whether on sufficient data - to exceed it in bulk. What was its origin, what its purpose, what its connection with Abury we cannot say, and can but idly speculate: for I have always maintained that the examinations into its centre hitherto made by a shaft and by tunnelling afford no conclusive evidence that it is not sepulchral and I am glad to find that Canon Greenwell is of the same opinion.  Nor is Silbury the only colossal barrow in our district, for second only to it, but over-topping all others in England, is the great mound of Marlborough, though it has been so mutilated, so pared and pruned, and cut about and planted that its original proportions are scarcely discoverable : it is, however, unquestionably a gigantic tumulus, and it is not impossible that it may perchance, have had sum connection with Abury and Silbury.

And as we know Jim Leary cored the mound and found evidence it as the good Rev suspected.