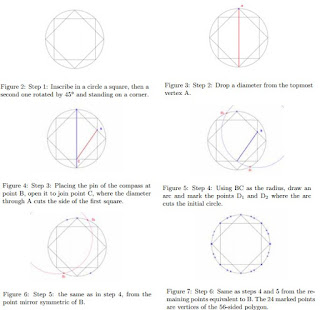 Click to embiggen
They even bring in Plutarch's Moralia. Isis and Osiris "It is plain that the adherents of Pythagoras hold Typhon to be a daemonic power; for they say that he was born in an even factor of fifty-six; and the dominion of the triangle belongs to Hades, Dionysus, and Ares, that of the quadrilateral to Rhea, Aphroditê, Demeter, Hestia, and Hera, that of the dodecagon to Zeus,c and that of a polygon of fifty-six sides to Typhon, as Eudoxus has recorded."
Posted by Tim Daw at Saturday, December 17, 2016