"...Paul Sample, a former mayor of Salisbury, has attacked the scheme as a “cheap and nasty” addition to the World Heritage Site; while Peter Alexander-Fitzgerald, a member of the International Council on Monuments & Sites, claimed the centre resembled “a derelict aircraft hangar”. 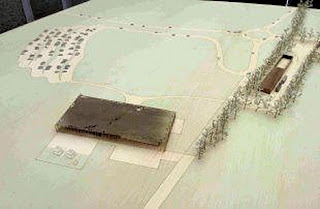 Sample said: “It’s cheap and nasty and isn’t going to do justice to the site. It looks like an immigration detention centre. It’s not something that makes you feel part of something ancient and mystic.

“We should be building something to last. We should have had an international competition.”

Alexander-Fitzgerald commented: “This looks like an IT student’s first attempt at rendered graphics. It’s amateurish and causes one to wonder about the quality of the finished product."
Posted by Tim Daw at Monday, December 21, 2015