A Buried Sarsen at Durrington Walls

I was told that a sarsen stone had been spotted in a hole at Durrington Walls, and especially with the interest in the “Superhenge” idea of a row of buried stones under the bank there I thought a walk round was in order.

The reported stone is on the north side whereas the “Superhenge” row is on the other side, under the southern bank. And whereas they are believed to be large monoliths (or not stones at all in the competing hypothesis) this stone is quite small. 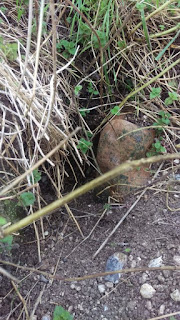 It is stuck fast in the ground but moves slightly on touch and I would estimate from the angle of movement it is about 60 cm in length at most. It is dark reddish colour, rounded and unworked as far as can be seen and is typical of the smaller local sarsens.

I have indicated its position with a circle on the photo and plan. 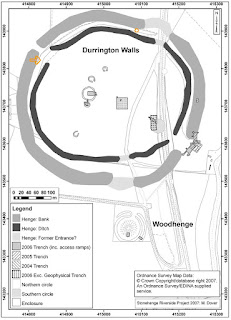 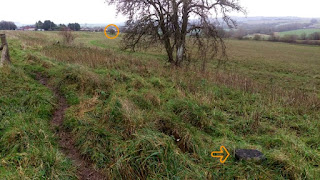 This area of the scarp seems quite free of modern debris but because of badger and rabbit damage the stone could easily have been deposited there at any time and then buried. It is the sort of stone a ploughman would have carried to the edge of a field and tipped onto the waste ground of the scarp.

(The bank of the henge is badly ploughed out on the flatter surface above the scarp.)

Further to the west there is a disputed entrance to the henge at the head of the valley up though the monument. As you walk round the scarp to this area the scarp becomes increasingly contaminated with what looks like early 20th Century rubbish, bottles, ash, some metal etc. Where the entrance might be there is a War Department concrete marker, marked with an arrow. It is obvious that this area was used as a rubbish dump and the shape of the scarp is altered by the accumulation of the rubbish. At the top of the entrance there seems to be a shallow hollow way towards Larkhill though the ground is very disturbed with animal holes and other field marks. 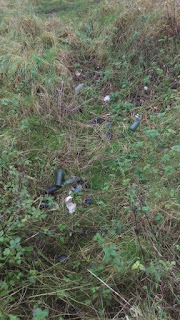 It would be great if the original features could be recovered from under the rubbish.
Posted by Tim Daw at Friday, December 18, 2015