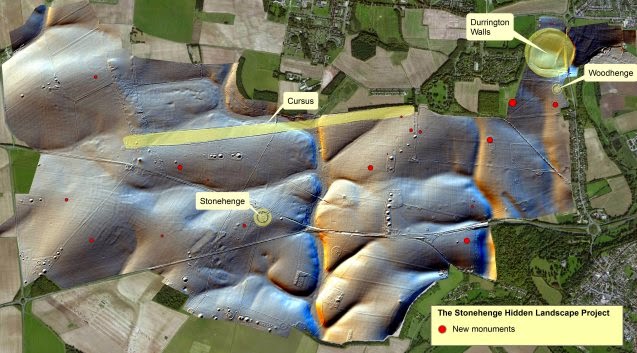 A host of previously unknown archaeological monuments have been discovered around Stonehenge as part of an unprecedented digital mapping project that will transform our knowledge of this iconic landscape – including remarkable new findings on the world’s largest ‘super henge’, Durrington Walls.
The Stonehenge Hidden Landscapes Project, led by the University of Birmingham in conjunction with the Ludwig Boltzmann Institute for Archaeological Prospection and Virtual Archaeology, is the largest project of its kind.
Remote sensing techniques and geophysical surveys have discovered hundreds of new features which now form part of the most detailed archaeological digital map of the Stonehenge landscape ever produced. The startling results of the survey, unveiled in full at the British Science Festival, include 17 previously unknown ritual monuments dating to the period when Stonehenge achieved its iconic shape. Dozens of burial mounds have been mapped in minute detail, including a long barrow (a burial mound dating to before Stonehenge) which revealed a massive timber building, probably used for the ritual inhumation of the dead following a complicated sequence of exposure and excarnation (defleshing), and which was finally covered by an earthen mound. 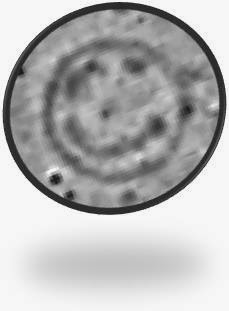 (Comment - Note the following two paragraphs which may be the most significant!)
The project has also revealed exciting new – and completely unexpected – information on previously known monuments. Among the most significant relate to the Durrington Walls ‘super henge’, situated a short distance from Stonehenge. This immense ritual monument, probably the largest of its type in the world, has a circumference of more than 1.5 kilometers (0.93 miles).
A new survey reveals that this had an early phase when the monument was flanked with a row of massive posts or stones, perhaps up to three metres high and up to 60 in number – some of which may still survive beneath the massive banks surrounding the monument.  Only revealed by the cutting-edge technology used in the project, the survey has added yet another dimension to this vast and enigmatic structure.
Work also revealed novel types of monument including massive prehistoric pits, some of which appear to form astronomic alignments, plus new information on hundreds of burial mounds, Bronze Age, Iron Age and Roman settlements and fields at a level of detail never previously seen. Taken together, these results – which will be featured in a major new BBC Two series titled Operation Stonehenge: What Lies Beneath – show that new technology is reshaping how archaeologists understand the landscape of Stonehenge and its development over a period of more than 11,000 years.
In the year marking the centenary of the First World War, the new Stonehenge map even impacts on our knowledge of that momentous event. Surveys have produced detailed maps of the practice trenches dug around Stonehenge to prepare troops for battle on the western front, as well as maps of RAF/RFC Stonehenge – one of Britain’s first military airbases used by the Royal Flying Corps between 1917 and 1920.
British project leader Professor Vincent Gaffney, Chair in Landscape Archaeology and Geomatics at the University of Birmingham, said: ‘The Stonehenge Hidden Landscapes Project is unique at a global level. Not only has it revolutionised how archaeologists use new technologies to interpret the past, it has transformed how we understand Stonehenge and its landscape.
‘Despite Stonehenge being the most iconic of all prehistoric monuments and occupying one of the richest archaeological landscapes in the world, much of this landscape in effect remains terra incognita.
‘This project has revealed that the area around Stonehenge is teeming with previously unseen archaeology and that the application of new technology can transform how archaeologists and the wider public understand one of the best-studied landscapes on Earth.
‘New monuments have been revealed, as well as new types of monument that have previously never been seen by archaeologists. All of this information has been placed within a single digital map, which will guide how Stonehenge and its landscape are studied in the future.
‘Stonehenge may never be the same again.’
Professor Wolfgang Neubauer, Director of the Ludwig Boltzmann Institute, said: ‘Developing non-invasive methods to document our cultural heritage is one of the greatest challenges of our time and can only be accomplished by adapting the latest technology such as ground-penetrating radar arrays and high-resolution magnetometers. The developments of the Ludwig Boltzmann Institute for Archaeological Prospection and Virtual Archaeology (LBI ArchPro) offer Europe the opportunity to carry out fundamental archaeological research at a scale and precision never previously attempted.
‘No landscape deserves to benefit from a study at this level of detail more than Stonehenge. The terabytes of digital survey data collected, processed and visualised by LBI ArchPro provide the base for the precise mapping of the monuments and archaeological features buried in the subsurface or still visible in the landscape surrounding Stonehenge. After centuries of research, the analysis of all mapped features makes it possible, for the first time, to reconstruct the development of Stonehenge and its landscape through time.’
The Stonehenge Hidden Landscapes Project is a collaboration between the University of Birmingham; Ludwig Boltzmann Institute for Archaeological Prospection and Virtual Archaeology, Vienna and its international partners; University of Bradford; University of St Andrews; and the ‘ORBit’ Research Group of the Department of Soil Management at the University of Ghent, Belgium.
The project operates under the auspices of the National Trust and English Heritage.
Dr Nick Snashall, National Trust Archaeologist for the Avebury and Stonehenge World Heritage Site, said: ‘Using 21st-century techniques, the Stonehenge Hidden Landscapes team have transformed our knowledge of this ancient, precious and very special landscape. Their work has revealed a clutch of previously unsuspected sites and monuments showing how much of the story of this world-famous archaeological treasure house remains to be told.’
Dr Heather Sebire of English Heritage, Curator of Stonehenge, said: ‘This is such an exciting project. The surveys will help us form an understanding of possible new sites which have not been recorded before but which will need further investigation.’
Operation Stonehenge: What Lies Beneath is due to be broadcast on BBC Two at 8pm BST on Thursday 11 September. The documentary will also be broadcast in the US (Smithsonian Channel), Canada (CBC), Austria (ORF), Germany (ZDF) and France (France 5).
ENDS

Notes to editors
The Stonehenge Hidden Landscapes Project (2010–14)
http://lbi-archpro.org/cs/stonehenge/index.html
The Stonehenge Hidden Landscapes Project has brought together experts in non-invasive geophysical prospection and remote sensing, and specialists in British prehistory and landscape archaeology in order to carry out one of the most sophisticated single archaeological projects in Europe. The outstanding geophysical survey and visualization capabilities of the team has been made possible only because of the unique expertise and combined resources of the project partners, the Digital Humanities Hub and Department of Classics, Ancient History and Archaeology at the University of Birmingham; the Ludwig Boltzmann Institute for Archaeological Prospection & Virtual Archaeology (LBI Arch Pro) in Vienna and its European partners; the Division of Archaeological, Geographical and Environmental Sciences at the University of Bradford; the Department of Earth Sciences at the University of St Andrews; and the Soil Spatial Inventory Techniques Research Group at the University of Ghent.
This project aimed to address gaps in our knowledge and understanding of the Stonehenge landscape by conducting a cutting-edge geophysical and remote sensing survey at an unprecedented scale and resolution. Beginning in July 2010, the fieldwork took about 120 days, spread over four years. Cutting-edge geophysical technologies, applied at an unprecedented spatial scale and resolution using multiple motorized magnetometers, ground-penetrating radar arrays, electromagnetic induction sensors, earth resistance surveys and terrestrial 3D laser scanners, have revealed the landscape of Stonehenge through the largest and most detailed archaeological prospection project.
The results of the survey project are used to create a highly detailed archaeological map of the ‘invisible’ landscape, providing the basis for a full interpretative synthesis of all existing remote sensing and geophysical data from the study area. For the first time, it will therefore be possible to create total digital models of the Stonehenge landscape at a true ‘landscape scale’ that will not only transcend the immediate surrounds of individual monuments within the study area but will also tie them together within a seamless map of sub-surface and surface archaeological features and structures.
The Stonehenge Hidden Landscapes Project is supported by the work of numerous young researchers and remote sensing and archaeological specialists. These include Klaus Löcker, Mario Wallner and Dr Geert Verhoeven (Austria), and Eamonn Baldwin, Henry Chapman, Paul Garwood and Dr Eugene Ch’ng (UK).
The Stonehenge Hidden Landscapes Project is a collaborative work carried out under the auspices of the National Trust and English Heritage.
Posted by Tim Daw at Wednesday, September 10, 2014