Parchmark plan from English Heritage as published on http://www.bbc.co.uk/news/uk-england-wiltshire-28967538 - Colour enhanced for clarity. Click any to enlarge. In July 2013 various parchmarks were showing up at Stonehenge - as reported on this blog and professionally at http://antiquity.ac.uk/ant/088/ant0880733.htm The most noticeable were the stone hole marks between Stones 16 and 21.

But the Z and Y holes were also showing up well. Walking round them I noticed there seemed to be extra marks that were also in a circular pattern. They were jokingly called the Daw Holes as it seemed they were a product of my overheated imagination. But over the next week as the weather changed some became more noticeable and then they faded. As they were fading Mark Bowden and Sharon Souter from EH GPS mapped them as best we could. Some were more certain than others, some were quite doubtful but until the next spell of similar weather the plan above is as accurate as we will get of the phenomenon.

It was noticeable that the Z and Y holes that had been excavated and those that hadn't appeared the same, and that the other parch marks were very similar to the known holes.

I realised that the marks might have more modern causes, the most obvious being the Fire Garden for the Olympics, but they didn't seem to coincide with any installations so I am certain that was not a cause.

One reason for some of the marks may be the larch poles used to prop the stones up in late Victorian times. Sharpe's aerial photograph shows them well and can be overlain to some degree of accuracy onto the plan (As stones were leaning it is not completely accurate.) 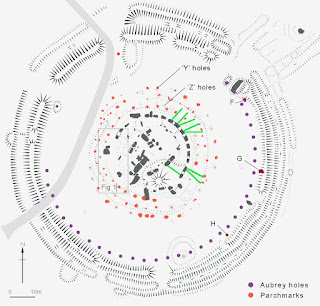 Apart from the poles for Stone 7 they don't noticeably line up with the marks but I would treat any marks near where the poles were installed with scepticism.

But this still leaves a lot of unexplained marks forming a rough ring equidistant between the Z and Y holes. 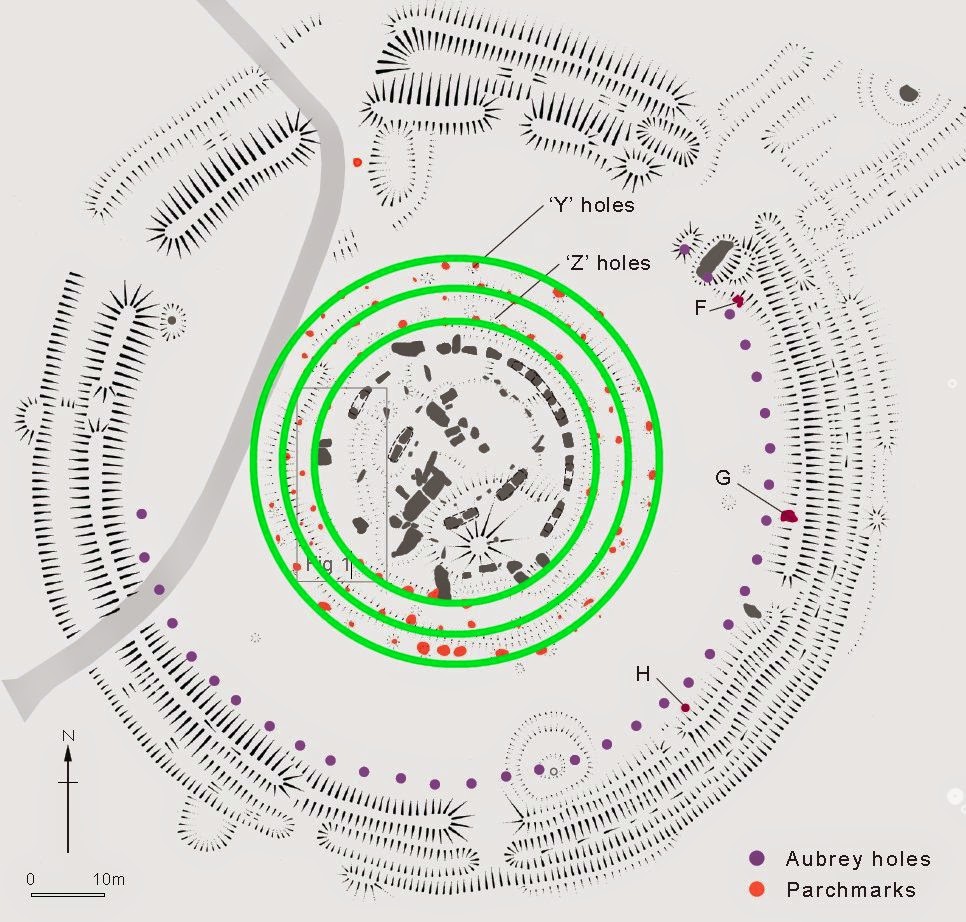 The wobble in the ring of Y holes (outer ring of marks) in the south east corner might be explained by reassigning Y6, Y7 and Y8 to the middle "Daw hole" ring and noting the faint marks further out as possible Y holes that were missed by Hawley. 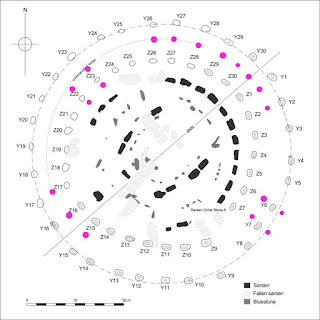 What the marks show and from when is a new mystery of Stonehenge.

The conclusion of the Antiquity paper is: “The new discoveries do tentatively allow further consideration of the multicircuit post settings envisaged by Gibson (1998: 41-44) and comparison with Woodhenge and the Sanctuary as well as Stanton Drew (David et al. 2004) but in the absence of dating evidence this remains speculative. The more diffuse marks around the periphery of the site might offer support for Pitts’ (1981) suggestion of an outer ring of stones. However, again, more research is needed to clarify this issue. This emphasises the potential for new discoveries about Stonehenge (one of the most widely researched monuments in the world) through non-invasive as well as invasive techniques.”