Bluestone sources are very much in the news this weeks as Rob Ixer and Richard Bevins release news of their work. Confusion is reigning as journalists fail to point out there are many different types of "bluestone", Brian John has published a list: http://brian-mountainman.blogspot.co.uk/2011/12/bluestone-rock-types.html

A quote from Bevins: "I don't expect to get Christmas cards from the archaeologists who have been excavating at the wrong place all these years." has been taken as a put down of the work Mike Parker Pearson has being doing at Craig Rhos-y-felin. But as Bevins and Ixer's paper from earlier this year makes clear the "Bluestones" at Craig Rhos-y-felin are rhyolites and the new source discovery at Carn Goedog is of spotted Dolerite - see http://www.sarsen.org/2013/11/carn-goedog-is-likely-major-source-of.html and http://www.sarsen.org/2013/11/carn-goedog-and-craig-rhosyfelin-aerial.html for more detail:

Here's the abstract of their earlier paper;

Carn Alw as a source of the rhyolitic component of the Stonehenge bluestones: a critical re-appraisal of the petrographical account of H.H. Thomas 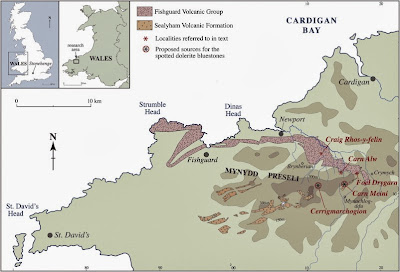 The source of the Stonehenge bluestones was first determined in the early 1920s by H.H. Thomas who was an officer with the Geological Survey of England and Wales. He determined that the so-called ‘spotted dolerites’ could be petrographically matched to a small number of outcrops in the Mynydd Preseli district in south-west Wales. The bluestones, however, comprise a number of additional lithologies, including rhyolite and ‘calcareous ash’, as well as various sandstones. Thomas was convinced that the volcanic lithologies in the bluestone assemblage were all sourced from a small area at the eastern end of the Mynydd Preseli, with the rhyolites originating from the prominent outcrop known as Carn Alw. Recently, provenancing of these rhyolites to Carn Alw has been questioned on the evidence of whole-rock geochemistry. This raised concerns over the original petrographical attribution. Accordingly a re-investigation was undertaken of the rhyolite petrography by re-examining the original specimens used by Thomas. Three of the original four thin sections studied by Thomas were re-examined, along with a newly made thin section from the fourth of Thomas' rock samples as the original thin section could not be located. The new petrographical evidence demonstrates convincingly that the two pairs of thin sections from the Preseli and Stonehenge as examined by Thomas do not match despite his contention and argues strongly that Carn Alw is not the source of the Stonehenge rhyolites which Thomas described. This reinforces the geochemical evidence presented recently and supports the contention that Craig Rhos-y-felin, to the north of Mynydd Preseli, is an important source of rhyolitic debris in the Stonehenge Landscape. Nevertheless, there remain uncertainties over the provenance of other Stonehenge rhyolites (and dacites), including four of the orthostats themselves.
Posted by Tim Daw at Friday, November 22, 2013