•
Stonehenge doleritic bluestones were first sourced to Carn Meini and Cerrigmarchogion in west Wales by Thomas in 1923.
•
Thorpe et al. in 1991 used incompatible element geochemistry to in part support Thomas’s attribution.
•
These attributions have been re-assessed using compatible element geochemistry.
•
Nearby Carn Goedog is now clearly identified as the major source of Stonehenge doleritic bluestones.

The Stonehenge bluestones were first sourced to outcrops in the high parts of the eastern Mynydd Preseli in SW Wales by H.H. Thomas in the early 1920s. He recognised the distinctive ‘spotted dolerite’ from his fieldwork in that area and suggested that the tors of Carn Meini (also known as Carn Menyn) and Cerrigmarchogion were the most likely sources. In the early 1990s, in a major contribution to our understanding of the Stonehenge bluestones, the geochemistry of a set of samples from Stonehenge monoliths and debitage was determined and compared against the geochemistry of dolerites from the eastern Mynydd Preseli by a team from the Open University led by R.S. Thorpe. They argued that the majority of the Stonehenge dolerites could be sourced from outcrops in the Carn Meini-Carn Gyfrwy area, based on the concentrations of the so-called ‘immobile’ elements (elements which are not affected by rock alteration processes), in particular TiO2, Y, and Zr. However, these elements are incompatible during crystallization of mineral phases in basaltic systems (that is they do not enter into the mineral phases which are crystallizing but are concentrated in the residual liquid) which severely hampers their use in discriminating between different pulses of an evolving magma (as is the case of the doleritic sills emplaced high in the crust and now exposed in the Mynydd Preseli). An alternative strategy in this study re-examines the data set of Thorpe’s team but investigates the concentration of elements which are compatible in such basaltic systems (that is elements which do enter into the crystallizing mineral phases), namely MgO, Ni, Cr and Fe2O3. On the basis of the abundances of these elements on bivariate plots and also by using Principal Component Analysis on the dataset available and various sub-sets we identify three compositional groupings for the Stonehenge doleritic monolith and debitage samples and conclude that the majority of them (Group 1 of this paper) can be sourced to the prominent outcrop in the eastern Mynydd Preseli known as Carn Goedog. We also offer potential sources (with one exception) for those Stonehenge dolerites which appear not to relate to Carn Goedog.

Figures and tables from this article: 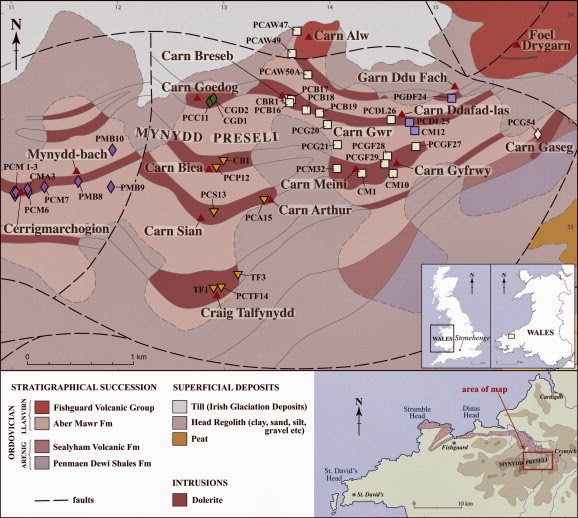 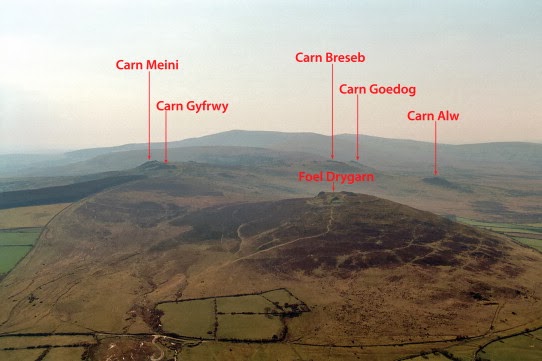 Oblique aerial view of the eastern Mynydd Preseli looking approximately westsouthwest, showing the nature of the terrain and a number of the key geological outcrops. Photo courtesy of Sid Howells.