Gowland’s excavation report of 1901 details the contents of the pits he dug to use for his supporting props as he straightened Stone 56.

The details are in the appendix and for excavations B & C read:
Excavation B. 3 feet 6 inches long, 3 feet 6 inches wide, and 3 feet deep.
The chalk rock was reached at the same depth as in A (1 foot 3 inches below the turf). There was a much smaller quantity of stone chippings. All the stones were represented, sarsen being somewhat in excess of the “bluestones;” of the latter, diabase and “fissile rock” were most abundant.There were, too, several pieces of iron pyrites, three small fragments of ancient pottery, and one of micaceous sandstone, just above the chalk.
Excavation C. 3 feet long, 2 feet 4 inches wide, and 3 feet deep.
Here the ground below the turf was all earthy chalk rubble. The chalk rock was not reached. There were but very few chippings of the stones, and they were accidentally thrown away.
A hammerstone of compact sarsen weighing 15 ounces was also found. 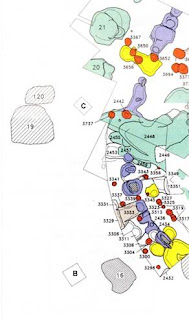 The position of B & C is marked on this plan from Cleal et al.

Cleal et al’s position of Hole C doesn't quite match Gowland’s original plan - this is a comparison of a sketch of the parch marks, Gowland’s (from his 1901 report)  and Cleal’s. 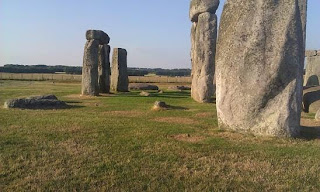 The positions of  Excavation B is quite clear in the foreground of this photograph taken on 19/7/13 by Tim Daw. B was into what was undisturbed ground.

This demonstrates that the parch marks are showing excavations.

Excavation C was into rubble down to its full depth of three feet, the chalk rock wasn't found. From its position, description and how it fits in with the other parch marks it seems that Gowland unknowingly excavated into the stone hole for Stone 20. 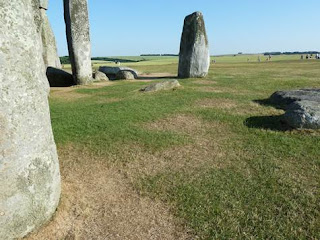 This photo taken by Simon Banton on the same date may be showing the outline of Excavation C within the line of other marks.

(Click any plan or picture to enlarge)
Posted by Tim Daw at Wednesday, September 11, 2013