The Altar Stone - A Fallen Stone or Original Sunrise Marker?

A few clippings about the Altar Stone.

Because it lies skewed across the Summer Solstitial Sunrise it has been assumed it is a fallen stone. But no hole has been found for it and it is hard to see how it fell in to its present position if it was a central marker. Atkinson wondered if it was part of a pair - see below - but there seems to be little evidence for this theory. I think the consensus view is coming round to believing it is is substantially in its original position and orientation.

Gordon Freeman points out that this skewed position aligns it to the Winter Solstitial Sunrise as well as crossing the Summer one.   This happens to be the same argument I make about the Great Trilithon which is parallel to the Altar Stone - see http://www.sarsen.org/2012/07/stonehenge-resurrection-alignment.html.

Intriguingly there are two post holes marked to the north-west of the Altar Stone. Further north-west the ground has been too disturbed by early excavations but could they be the corners of a platform or other structure also so aligned? 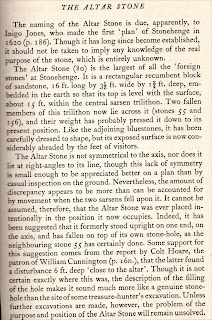 The naming of the Altar Stone is due, apparently, to
Inigo Jones, who made the first ‘plan’ of Stonehenge in
162o (p. 186). Though it has long since become established,
it should not be taken to imply any knowledge of the real
purpose of the stone, which is entirely unknown.
The Altar Stone (8o) is the largest of all the ‘foreign
stones’ at Stonehenge. It is a rectangular recumbent block
of sandstone, 16 ft. long by 3 ft. wide by 1 ft. deep,
embedded in the earth so that its top is level with the surface,
about 15 ft. within the central sarsen trilithon. Two fallen
members of this trilithon now lie across it (stones 55 and
156), and their weight has probably pressed it down to its
present position. Like the adjoining bluestones, it has been
carefully dressed to shape, but its exposed surface is now
considerably abraded by the feet of visitors.


The Altar Stone is not symmetrical to the axis, nor does it
lie at right-angles to its line, though this lack of symmetry
is small enough to be appreciated better on a plan than by
casual inspection on the ground. Nevertheless, the amount of
discrepancy appears to be more than can be accounted for
by movement when the two sarsens fell upon it. It cannot be
assumed, therefore, that the Altar Stone was ever placed in
intentionally in the position it now occupies. Indeed, it has
been suggested that it formerly stood upright on one end, on
the axis, and has fallen on top of its own stone-hole, as the
neighbouring stone 55 has certainly done. Some support for
this suggestion comes from the report by Colt Hoare, the
patron of William Cunnington, that the latter found
a disturbance 6 ft. deep ‘close to the altar'. Though it is not
certain exactly where this was, the description of the filling
of the hole makes it sound much more like a genuine stone-
hole than the site of some treasure-hunter’s excavation. Unless
further excavations are made, however, the problem of the
purpose and position of the Altar Stone will remain unsolved. 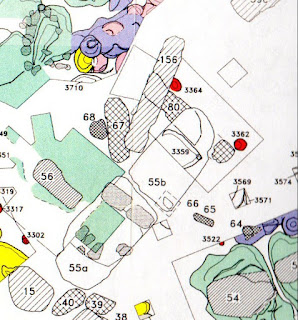 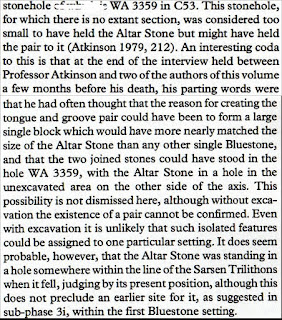 Stonehole  WA 3359 in (excavation) C53. This stonehole,
for which there is no extant section, was considered too
small to have held the Altar Stone but might have held
the pair to it (Atkinson 1979, 212). An interesting coda
to this is that at the end of the interview held between
Professor Atkinson and two of the authors of this volume
a few months before his death, his parting words were
that he had often thought that the reason for creating the
tongue and groove pair could have been to form a large
single block which would have more nearly matched the
size of the Altar Stone than any other single Bluestone,
and that the two joined stones could have stood in the
hole WA 3359, with the Altar Stone in a hole in the
unexcavated area on the other side of the axis. This
possibility is not dismissed here, although without exca-
vation the existence of a pair cannot be confirmed. Even
with excavation it is unlikely that such isolated features
could be assigned to one particular setting. It does seem
probable, however, that the Altar Stone was standing in
a hole somewhere within the line of the Sarsen Trilithons
when it fell, judging by its present position, although this
does not preclude an earlier site for it, as suggested in
sub-phase 3i, within the first Bluestone setting.

The fact that the WSR and WSS lines intersect above the centre of the Altar Stone (Fig. 9),
make it virtually certain that the Altar Stone is still in its original orientation. Stone 80 was
probably pushed downward when 55 fell on it. 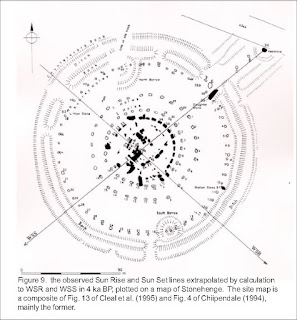