Gruesome Discovery in a Well House near Stonehenge

Wiltshire Coroner's Inquest March 29th 1918
Soldier Found in a Well
Gruesome Discovery near Stonehenge
Last week the body of a soldier, who had evidently died at Christmas, was found at the bottom of a well near Stonehenge. He was a pioneer in the Building Section of the Royal Engineers, named William John Hamilton (link to his details), and 43 years old. His home was in County Tyrone, Ireland.
Sapper J Duncan, of a Building Section of the Royal Engineers, stationed at Stonehenge Camp, stated that on Christmas Day, 1917, he was in the company of Hamilton and a sapper named M’Cool. They left the aerodrome at Stonehenge at about 9pm and went to their camp, which was about 20 minutes walk away. Hamilton occupied the same hut as he did, and they both went in. About 9.30pm the man left the hut, and on finding he was not there the following morning witness reported the matter to the corporal. Hamilton had only four pints of beer as far as he could remember. He would not say he was drunk ; he walked straight on the way to the hut.
Private Frank Smith, Hants Regiment, stationed at Durrington, said he was walking near Stonehenge on March 17th and passed a well there. He went up to it because he noticed a round brick building with a thatched roof. There was a doorway partly filled up with a hurdle. He found there was a well, and thinking there might be a body in it on account of the strong smell he reported the matter when he returned to camp.
Corporal W A Bone, Hants Regiment, said he put a hurricane lamp into the well on March 19th, in consequence of instructions, and saw what appeared to be a body, with brass buttons on the clothing. He telephoned to the civil police at Amesbury. If it had been dark and he had gone to this place for shelter witness said he thought he might have fallen in, as he did not know there was a well.
PC Norris gave evidence as to the recovery of the body from the well, which was from 40 to 50 feet deep, and contained two or three feet of water and mud. Hamilton’s hands were in his overcoat pockets. He had in his possession a purse containing 6s 9¾d. The man described on the identity disc was posted as a deserter on December 26th.
Replying to the Foreman, witness said there was a space of about two feet all round the well, the diameter of the opening of which was from six to eight feet. There was a beam over the top of the well. He had seen the building before, but did not know it covered a well.
(Click pictures to embiggen) 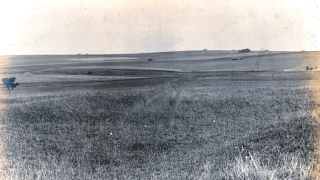 The Well House which the New Visitor Centre has been built over is mapped as a square structure and is not very close to Stonehenge. 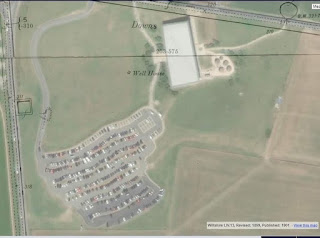 The Well House to the south of the A303 at Stonehenge bottom is however a small round building as described in the Inquest report and most likely to be disused. It is probably where Pioneer William John Hamilton sadly drowned on Christmas Day 1917. He is buried in Amesbury Cemetery. 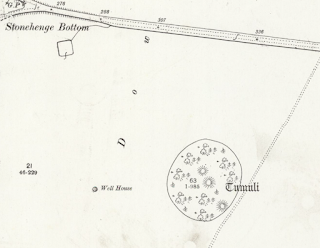 Wiltshire Museum has a late Victorian painting (DZSWS:2015.1004) of such a well house near Stonehenge. Though the stones in the picture seem to have been repainted or added later, they fit the view from this well house in Stonehenge bottom with a sunset. The painting is to be restored and I look forward to seeing it refreshed. 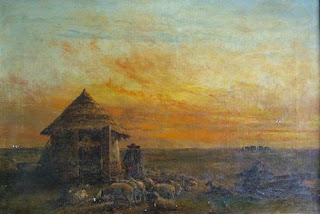