Higham, R., & Carey, C. The Durrington Walls Sarsen Burial relocated and reconsidered. The Wiltshire Archaeological and Natural History Society Magazine, 112, 74-84. (2MB PDF) discusses the curious case of two sarsens with burials at Durrington Walls that have disappeared and whether they are actually just one stone that moved. 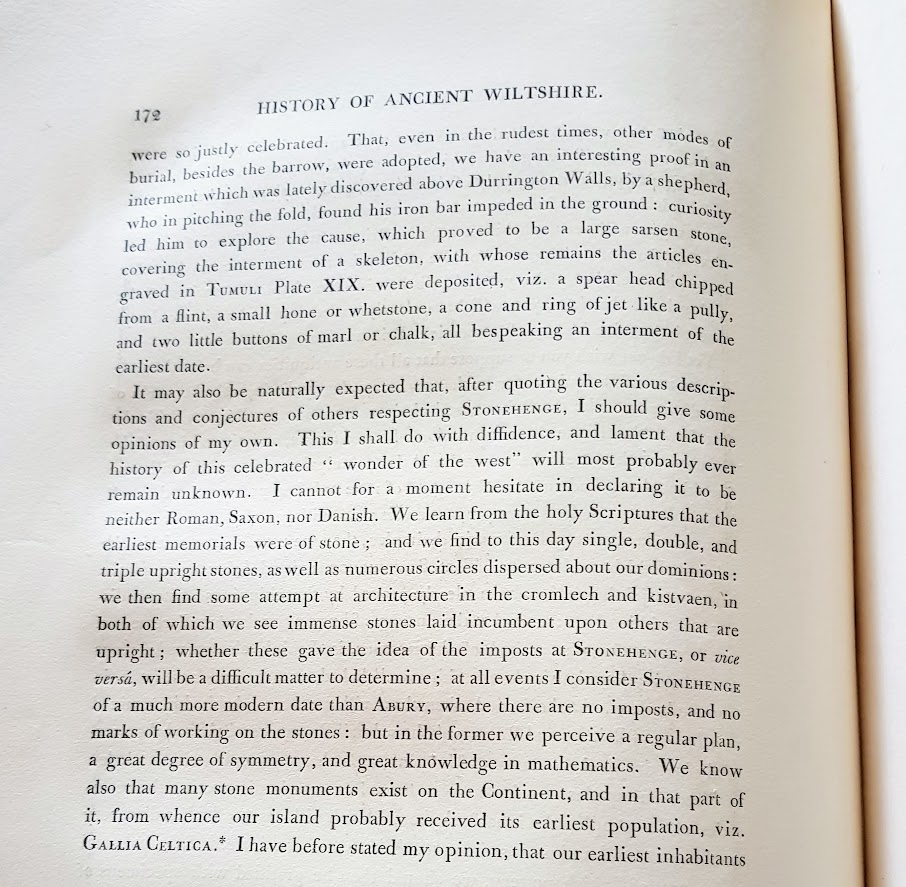 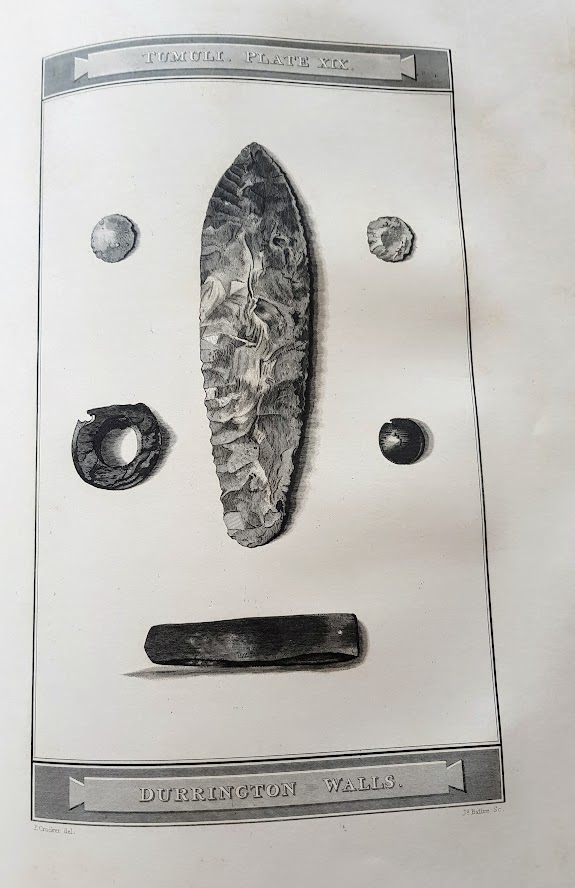 In the rudest times other modes of burial, besides the barrow, were adopted. We have an interesting proof in an interment which was lately discovered above Durrington Walls, by a shepherd, who in pitching the fold, found his iron bar impeded in the ground : curiosity led him to explore the cause, which proved to be a large sarsen stone, covering the interment of a skeleton, with whose remains the articles engraved in TUMULI Plate XIX, were deposited, viz. a spear head chipped from a flint, a small hone or whetstone, a cone and ring of jet like a pully, and two little buttons of marl or chalk, all bespeaking an interment of the earliest date.

A stone then appears on maps on the high ground to the west of Durrington Walls but then disappears early in the twentieth century. It doesn't appear on earlier maps or on the map in Colt Hoare's book. 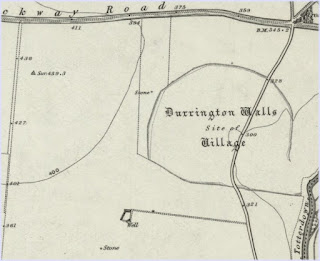 However the 1923 revision no longer marks it. 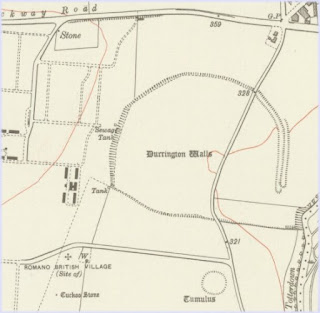 However a "Stone" appears just off The Packway to the top left of the the 1920's map, but is this the sarsen stone, or even a sarsen stone?
Higham and Carey interpret this as the Stone described in:

I may say that there is a great deal of Romano- British pottery visible about 100 yards south-west of the Walls, with many pits and trenches. This was evidently the  site of a considerable settlement and the pottery extends for some  distance southwards, to a point at least 150 yards from the S.W. corner of the work.
I also found four fragments of ware of the same period close to,  and apparently dug by a rabbit from underneath the sarsen that  lies about 350 yards from the earthwork. Presumably this is the stone mentioned by Colt Hoare in Ancient. Wilts, Vol. I., p. 172, but he uses the vague phrase "above Durrington Walls," From the pottery and from the pale and chalky nature of the soil thrown up I should judge that here was the site of an interment. Rabbits must have a reasonable depth of soft stuff for their workings, and it is very rare in this locality to find undisturbed chalk sufficiently friable to permit of rabbits burrowing therein, while still more rarely does enough soil overlie the chalk for rabbit buries. It has been suggested that this was a stone intended for Stonehenge, but dropped on the way, a ridiculous idea, for who would bring a stone about 6 feet x 5 feet X 3 feet 6 inches, weighing at least 5 tons, to within two miles of their destination and then leave it ?

So is this second stone with its Roman-British pottery the same stone as the Shepherd's stone with a neolithic burial under it? Farrer suggests that the stone has not moved from above its interment.

Higham and Carey propose that Farrer's stone is the Shepherd's stone that had been moved to the edge of the field to ease cultivation. However I think they mistake the description of it being "above" Durrington Walls to mean to the north."However, this reference does provide the only description of a sarsen stone immediately north of Durrington Walls including its dimensions" I wonder if the effort of moving a five ton stone uphill across the field would have been considered worthwhile at such time, others such as the Cuckoo Stone were just left. The ditch of Durrington Walls a little way downhill from the Shepherd's stone was used as a dump and being a lazy farmer I would have just pushed it to that edge if I were have to moved it. The ditch there is full of later military camp detritus which would cover any stone dumped earlier.    Farrer's stone also sounds a lot larger than a buried burial covering slab, especially one that a Shepherd was able to dig under. My thought is that maybe the stone was left exposed and then was covered in and reburied, either naturally or for farming purposes, which would explain its appearance and disappearance from the maps. Higham and Carey suggest it may have been moved as part of the development of the camp.

But it is a fact that the Packway stone wasn't marked on maps until the Shepherd's stone disappeared. It is also remarkable that it has disappeared again, unless it is hiding in the brambles. Where has it gone? Was it even a sarsen stone?

A fascinating mystery that Higham and Carey have produced a excellent paper on and one that suggests further research would be worthwhile.
UPDATE Aug 2021 - it occurs to me that the Cuckoo stone is about 350m South West from Durrington Walls and of the the size that Farrer's stone is described as. And it is known for a Romano-British burial. Farrer doesn't state that his stone is SW of Durrington Walls but its description follows other observations of that quarter. I think he may just be describing the Cuckoo Stone.  Farrer's substantial stone was about 2m x 1.5m by 1m in modern money - the Cuckoo stone is the same.
Posted by Tim Daw at Tuesday, June 25, 2019