The Big Pit at Stonehenge

Mike Pitts has raised the possibility that Stone 16 was originally in a hollow in what is now the centre of Stonehenge before humans arrived. This hollow was then further excavated for unknown purposes after the stone was removed and set up in its present position. This is a refinement of the idea that has fairly widespread acceptance that the Heelstone was originally in a hollow adjacent to where it is now, and that its position together with the periglacial features pointing at the solstice explain why Stonehenge is situated where it is.

I have written before of the pit in the centre of Stonehenge http://www.sarsen.org/2013/04/the-mystery-pit-in-centre-of-stonehenge.html:


Stonehenge by Mike Parker Pearson in Chapter 8 p.129 - 132 discusses the large pit in the centre of Stonehenge: 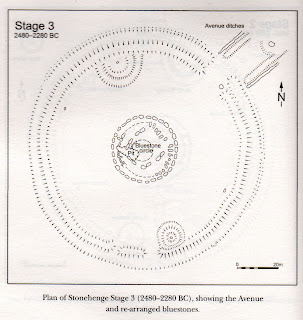 He pieces together evidence about it from excavations by Atkinson, Hawley and Gowland and concludes it dates to 2440-2100 BC, after the Great Trilithon was erected and that it was filled back up in prehistory because a bluestone was set into it as part of the inner oval of bluestones.

Atkinson thought it was the ramp for the erection of Stone 56 - photos below - but MPP shows it wasn't. The dark area of the ramp can be seen on the side of the excavation leading down towards the base of 56 but  it is too shallow to be of use and doesn't join up to Gowland's excavation around the base of 56. 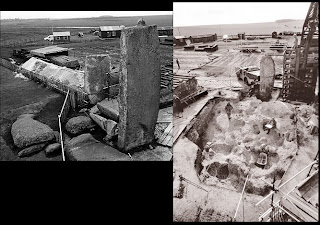 It is worth noting that his date comes from an antler found in the fill of the pit and that all the dates of the trilithon raising and other features of Stonehenge are open to further refinement so none can be considered definitive.

I find it more compelling that the pit is later than the trilithons because it seems to avoid them. Cleal et all p,201-2 has a detailed discussion of the feature and follows Atkinson's explanation that it was the ramp for 56 and notes it is difficult to distinguish between the "ramp" (pit) and the stonehole for Stone 57 which means there is uncertainty as to the temporal sequence of the features. But I think MPP is correct and that the pit is later.

Hawley excavated the pit before Atkinson and also describes it as a ramp and his and Atkinson's excavation drawings, in Cleal et al, show it to be smooth so it doesn't appear to be a natural hollow, though of course a hollow could be reworked (Pitts writes it was "dug into").

Having reread Atkinson, Cleal and MPP and the plans I think it being a natural stone hollow is a possibility but that there is no evidence to support it. Whether evidence that Stone 16 is local stone may appear as new techniques are being applied to the sarsen's composition I await with interest.

To me it looks more like a ramp dug either to erect another stone in front of the Central Trilithon or for another purpose (my theory that it was to retrieve the iconic Lake House meteorite has no evidence but it amuses me). But I think Mike has performed a great service in airing this theory which in his articles correctly has the limits of our knowledge highlighted. The press has oversimplified it but the central kernel of the theory that Stonehenge is where it is because of natural features is important and has the ring of truth to it.

As an aside I wonder if there is any relationship between the pit and the mound to the east of the Great Trilithon. And if it was suggested that Stone 16 with its similar shape was originally set up  next to the Heelstone in the vacant stonehole then that would be another interesting theory to consider.