Megaliths are spread across the Indian subcontinent, though the bulk of them are found in peninsular India, concentrated in the states of Maharashtra (mainly in Vidarbha), Karnataka, Tamil Nadu, Kerala, Andhra Pradesh and Telangana.

According to archaeologists R.K. Mohanty and V. Selvakumar, around 2,200 megalithic sites can be found in peninsular India itself, most of them unexcavated. Even today, a living megalithic culture endures among some tribes such as the Gonds of central India and the Khasis of Meghalaya. 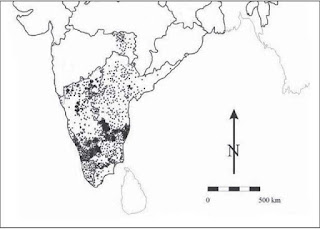 Understandably, the construction of megaliths was a massive endeavour, requiring the active involvement of the community. “Experiment on reconstruction of a burial from Vidarbha suggests that 70 to 80 individuals were required to construct a burial having 13.5m diameter with a deposit of 80 to 85 cm in two and half to three days without any leisure... Participation in construction by the community members could be social norm without labour charge. If not by any labour charge, a feast was probably prepared to honour the labour force provided by community members. Animals were probably scarified and a feast was prepared beside various other food items,” writes Chakrabarti.

To back this theory, just the non-consumable parts of a horse—i.e., skull and hoof bones—have been recovered from excavated burials in Vidarbha, dating back to 700-800 BC, indicating the rest was consumed in a feast. “In ethnographic parallels, sacrificing buffalo among Hill Soras of Odisha and Mithun (bos frontalis) among tribes in Arunachal Pradesh for preparation of feast in death ritual is a still prevalent custom,” notes Chakrabarti.

The paper by Mendaly on the megalithic practices of Gonds says, “They invite their relatives and friends from other villages and other castes, and erect the memorial stone in a burial complex or matha. After that a sheep or goat is be slaughtered in honour of the deceased, and its meat eaten at the feast, but before that they offer this meat to their village deity and their ancestors. They believe that the animals killed in this occasion are supposed to become the property of the deceased in the spirit world and there is the belief that if this ceremony is not organized then they face serious problems throughout the year.”