The consistent, not "warm", springs of Blick Mead


David Jacques describing Blick Mead "The springhead and springline water temperature is a steady 10-13 ºc all year. The experiments that confirmed this observation were conducted by Pete Kinge of QinetiQ using fixed thermal imaging cameras and by Tim Roberts." 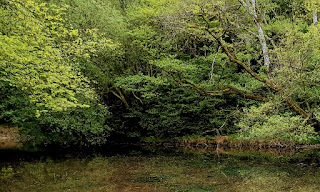 This steady consistent temperature provides the useful property of unfrozen water for drinking by the wildlife as well by humans and also encourages early grass growth for grazing. Blick Mead would have been one of the larger such spring fed pools in the area. The consistent temperature in a grove of trees would also provide for the panting hart cool water and shade in the summer. 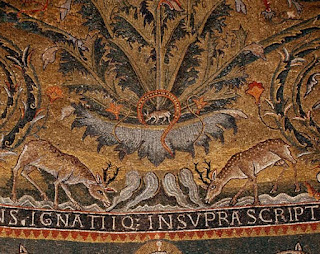 But these are not "warm" springs as usually understood. Warm springs or thermal springs are those where hot water from great depths in the Earth rises to the surface. Blick Mead's springwater is at the normal temperature of groundwater, with maybe a slight increase in temperature over neighbouring springs as the water is coming from under a greater depth of chalk than at them as the land rises steeply directly behind Blick Mead. (Groundwater temperature varies with depth - the ground temperature shows seasonal fluctuations to depths of about 15 m where the temperature is approximately equal to the mean annual air temperature(8 - 11° C in the UK). Below this the ground temperature increases at, on average, 2.6 °C per 100 m due to heat flowing from the interior of the Earth. Mean temperatures at 100 m depth in the UK vary between about 7 - 15°C.)

"Two reaches were investigated in this study. The reach on the tributary of River Piddle at Wateston Manor, Dorset, UK (National Grid Reference SY 723956) was located  c 10 m below the main spring which feeds this watercourse. ... The River Bere at Bere Heath. Dorset, UK is a larger water course which is underlain almost entirely by upper chalk. It rises in a number of springs and is fed by a borehole, and most of the How passes through watercress beds in the upper reaches. The channel in the study reach (National Grid Reference SY 723956) flows through cattle ….Measurements were made on a total of 28 days in February and March, 1994 and 12 days in July. 1994"

But there is a hint that there might actually be thermal springs nearby.

Just up river from Blick Mead is the site of English Heritage's first choice for a Stonehenge Visitor Centre - the planning documents have a wealth of Archaeological and geological information.
https://unidoc.wiltshire.gov.uk/UniDoc/Document/Search/DSA,444241

"The chemistry of the groundwater has been analysed in one sample obtained from BH8. The results of this indicate that the water has a pH value of 6.7 a temperature of 16.2°C, conductivity of 780µS/cm a total hardness of 338mg/l and a saturation of -42mg/l.
In consideration of these results the temperature of the groundwater at this location was unexpectedly high...." Appendice A10.4 - Extract From Geotechnical InvestigationsReport On Groundwater Conditions


Details of the testing are hard to find but it seems to have been taken in the spring and there is a suggestion that the groundwater is being contaminated by rain  falling on the surface stripped area. But even it is only one sample the "unexpectedly high" temperature of the groundwater near Blick Mead is intriguing.