In July 2013 parchmarks at Stonehenge were noticed and recorded. Parchmarks are where the grass is suffering from drought stress due to a difference in the soil compared to the rest of the area. In this context sharply defined ones can be taken as an indication of an archaeologically interesting hole that has refilled with slightly looser chalk which drains better than the undisturbed.

The main observations were of four large marks which indicated where the outer stone circle could have been completed with missing stones. There were also fainter, smaller marks which seemed to indicate a ring of holes between the Z and Y holes.

The 2013 observations were the basis of a paper https://www.researchgate.net/publication/286891547_Parchmarks_at_Stonehenge_July_2013  and a commentary https://mikepitts.wordpress.com/2014/09/01/at-last-a-stonehenge-story-that-is-exactly-what-it-says/ which is a very good summary and has this plan showing the rings of marks outside the stone circle. 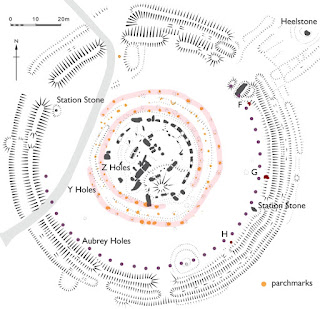 The four stonehole marks of the outer sarsen circle have retrospectively been spotted in photos from many different years. (Whether all the stoneholes ever held stones is not known, but that the circle was at least designed to be a complete circle is fairly certain and this was the first proof of it. - see https://www.theguardian.com/culture/2014/sep/01/stonehenge-dry-spell-grass-perfect-circle )
For a less academic take there were headlines such as Happy Accident With Garden Hose Leads To 'Really Significant' Stonehenge Discovery
The outer marks are harder to spot and more elusive. They also are within areas that have been disturbed and even had support struts inserted in them. So I was pleased to be able to spot them again last night before the Solstice revellers took over the site. They are not just a one year phenomenon. I am convinced that there is another ring equidistant between the two known rings.
Click pictures to embiggen them.

They are very faint and for those without the eye of faith a labelled version:

And back in 2013 when they were clearer 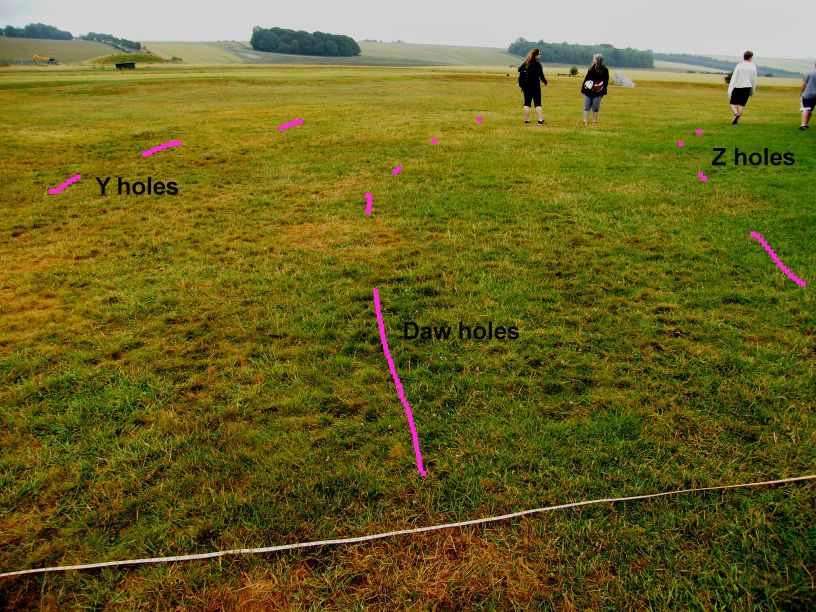 For comparison here are the parchmarks in July 2013