Station stone 93 (the one nearest the public hard path) in an aerial photo taken in 1906 by a Lieutenant Philip Henry Sharpe from the Royal Engineers Balloon Section.

The square is a fence erected to protect it, but what is the ring?

Here is the complete picture this is clipped from. 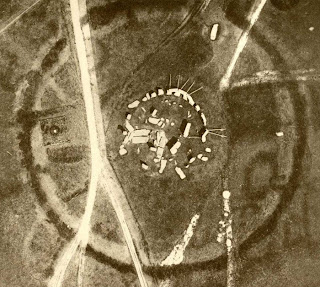 In aerial photos of Stonehenge there are many rings to be seen, they are mainly Fairy Rings which are natural fungal phenomena. "Chalky soils on higher elevations in the counties of Wiltshire and Dorset (U.K.) used to support many meadow-type fairy rings. Rabbits crop grass very short in open areas and produce nitrogen-rich droppings. Mushrooms need more soil nitrogen than grass does. A ring can start from a single spore from which the mycelium develops; the fruiting bodies of the mushrooms only appearing later, when sufficient mycelial mass has been generated to support them. Subsequent generations of fungi grow only outwards, because the parent generations have depleted their local nitrogen levels. Meanwhile, rabbits keep cropping the grass, but do not eat the fungi, allowing them to grow through their competition to tower, relatively, above the grass. "

A later aerial photograph of the Stonehenge Triangle shows many of them. 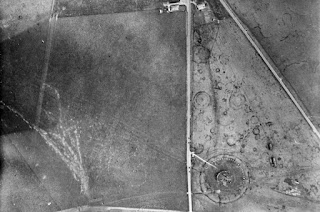 But is the ring around 93 a Fairy Ring? With a stone in the middle it cannot have grown evenly from a single spore, and if it had grown around the stone from one side it would not be so symmetrical. In the larger scale photo above from the 1930s I can almost imagine it is still visible but a search of more recent images, including the resistivity survey fails to show it up again. (As always click on any image to enlarge it).

It might just have been where sheep had walked round the stone rubbing on it or is a smaller dug ring such as Station Stone 94 (missing) had with the North Barrow?

And on looking at the 1930s photo there is another strange mark by the large barrow to the east (towards the top) of Stonehenge.

The barrow is to the left and to the right there is a horseshoe shape. A strange fairy ring, or a cropmark of a henge?

Again nothing seems to show up in more recent photos or surveys.

I think it is probably a Fairy Ring. When they get large concentric rings can form: By the time a circle of mushrooms reaches about 6 metres (20 ft) in diameter, rabbit droppings have replenished the nitrogen levels near the centre of the circle, and a secondary ring may start to grow inside the first.