I was lucky enough to hear David Field's lecture The Stonehenge Landscape Project at Devizes last month.
He mentioned the possibility of there having been a central mound in Stonehenge that predated the stones. I know he has yet to release his work but I am not trying to steal any thunder here as others have previously publicised this.

It is important to note that this mound might be an artefact of the various excavations of the twentieth century but this 1875 photo, and others, show the ground rising quite clearly before then. So I think we can say it is an original feature.

Update July 2014 - Photo from about 1907 showing a policeman standing on the mound.

The mound shows up clearly on a contour map of Stonehenge. I have circled it and the North and South Barrows in Red. 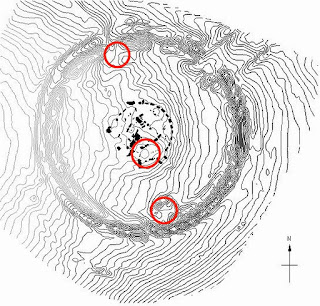 Source - sarsen56: "A surface contour map of Stonehenge. The ground rises from c. 100m above sea level on the east, to c.103m to the west...note the mounded area within the centre which appears to predate the stones"

There doesn't seem to be any records of any excavations where the mound is which would tell us if it is natural or not. Walking round Stonehenge it looks unnatural.

We also don't know if the Barrows, which aren't Barrows of course, predate the ditch or not. We know they contained central stones, did the middle mound also have one? Is there a stonehole waiting to be found?

Put these unknowns together and there is a hypothesis that the original feature of Stonehenge was a line of three man-made mounds with upright stones. It is only a wild hypothesis, but it is one that can be tested.

UPDATE - http://www.sarsen.org/2013/07/digging-into-david-fields-central-mound.html has the results of an excavation in the central mound area.
Posted by Tim Daw at Sunday, January 22, 2012